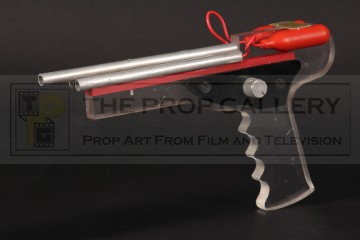 From the 1983 serial Arc of Infinity starring Peter Davison as The Doctor this is an original Gallifreyan staser pistol, the side arm of the Chancellery Guard. Custom made for the production by the BBC Visual Effects Department the weapon is constructed from thick hand cut perspex with barrels of metal and is detailed with soda siphon bottles which have been replaced, these staser pistols can also be seen used in the 20th anniversary serial The Five Doctors.

The weapon measures approximately 11" long and remains in excellent vintage condition with minor marks from use and handling, generally fine.

A highly displayable and significant artefact from this cult science fiction series.