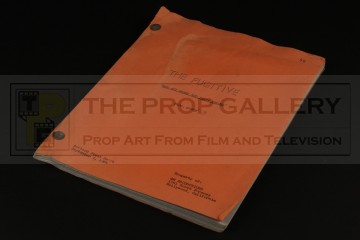 An original script used in the production of The Fugitive, the 1960s television series created by Roy Huggins.

This original production used revised first draft script for the season two episode Fun and Games and Party Favors is dated September 7, 1964 and comprises of 59 blue pages in addition cast and set lists bound between front and rear covers of orange card with the front bearing the name of the series and episode title with a production code below.

The script remains in good vintage condition with some old water damage resulting in colour transfer to the interior title page.