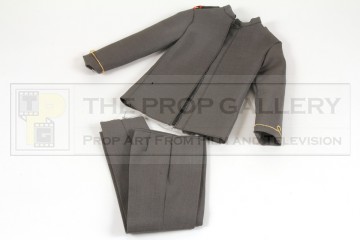 Captain Scarlet and the Mysterons / Joe 90

An original puppet costume used in the production of Captain Scarlet and the Mysterons, the 1967 Supermarionation television series created by Gerry and Sylvia Anderson.

This custom made puppet costume is constructed from dark green cotton and comprises of a collarless jacket with matching trousers. First seen worn by the Frost Line staff including General Ward in the Captain Scarlet episode Avalanche it was later modified slightly to include the addition of epaulette braiding for the character Major Kloss in the Joe 90 episode International Concerto. Both parts of the costume are hand stitched to the interior 'NO 1', the jacket measuring approximately 10" long and the trousers 13".

The costume remains in excellent production used condition with one minor hole to the jacket and two on the trousers, otherwise fine.