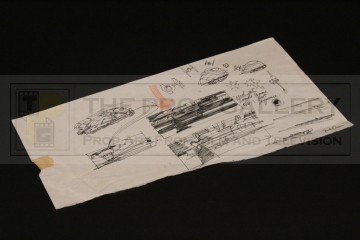 An original concept artwork created during the production of the 1983 science fiction picture Return of the Jedi, the third instalment of the original Star Wars trilogy directed by Richard Marquand.

Mattes are large scale, finely detailed and realistic paintings which are photographed and composited with live action footage usually to extend or provide a background which cannot be achieved practically, this art form was a staple of the motion picture industry for many years but has been largely replaced by computer generated imagery in more recent times. This rough concept artwork relates largely to the scene in the rebel hanger where Han gives Lando use of the Millennium Falcon, the background being a painting achieved by artist Frank Ordaz who was recruited to the ranks of the matte department at Industrial Light & Magic by supervisor Michael Pangrazio.

The rough concept is accomplished in ink on paper in the hand of Ordaz and features two rough sketches of the aforementioned scene with the annotation 'end cut, Lando frame 56-1' and a sketch of the Millennium Falcon in addition to rough outlines of Tie Fighters, Star Destroyers and other craft from the Star Wars universe. The work is signed by the artist to the bottom right and has been torn from a larger page, it also features a small piece of tape to the left edge.

The artwork measures approximately 11" x 5" and remains in good condition with some minor creasing and edge wear, the piece is accompanied by a brief note from the artist stating 'This ink sketch was done for the matte sequence of the Falcon dock used in Return of the Jedi by Frank Ordaz. ILM.' which is hand signed in ink by Ordaz.

A rare and displayable example of original artwork from one of the most influential and highly regarded franchises in cinematic history.