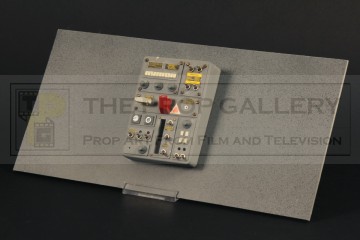 An original control panel used in the production of the popular children's television series Fireman Sam.

This control panel is that of Wallaby 1, Pontypandy's Mountain Rescue helicopter piloted by Australian Tom Thomas and can be seen used on screen throughout series five of the show which aired in 2003, this used more advanced techniques than previous series and was the final series before production switched to CGI.

The control panel was used on screen in the insert shot we see every time Tom jumps in the helicopter, built for use in extreme close up the panel is highly detailed and scratch built with various hand screwed panels containing numerous buttons, dials and flip switches which are operational and move back and forth, the prop is further decorated with incredibly detailed decals which for the most part bear legible safety writing due to its use in close up shots. The control box is mounted on a thick plastic board making a substantial and heavy prop which was almost certainly the only one built for production.

The plastic board measures approximately 12.5" x 6" with the control box element measuring 4" x 3", it remains in excellent screen used condition while lacking some minor pieces.

An incredibly rare and displayable artefact from this much loved children's television series.