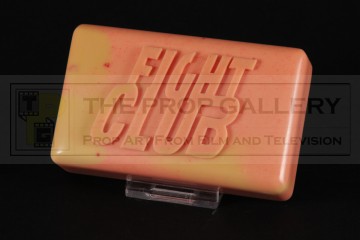 An original prop from the production of Fight Club, the 1999 picture starring Brad Pitt and Edward Norton under the direction of David Fincher.

Soap bars such as this were custom made by the production and can be seen used prominently on various publicity material used during the promotion of the picture including photoshoots with both Brad Pitt and Edward Norton. Custom made by the production the bar is constructed from resin and features raised lettering and a marbled finish created as part of the moulding, the final image presented here shows Brad Pitt holding a similar bar on set during filming.