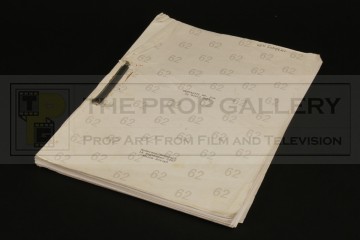 An original script used in the production of Fantastic Mr. Fox, the 2009 stop motion animated comedy directed by Wes Anderson.

This original production used script is dated 18th September 2007 and comprises of 60 pages each watermarked with a number to prevent unauthorised distribution, to the top corner it is hand inscribed with the name of art department modeller Will Sumpter who utilised this script during the production.

The script remains in overall good production used condition exhibiting corner and edge wear with some tearing to the front cover.