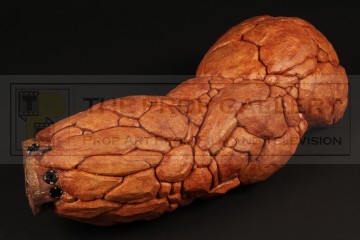 An original costume piece used in the production of Fantastic Four: Rise of the Silver Surfer, the 2007 superhero sequel directed by Tim Story.

This is an original arm which formed part of the memorable costume worn by Michael Chiklis as The Thing. The suits were created for the film by Spectral Motion who handled various creature work and prosthetic make up requirements. The arm is constructed from a supple yet durable foam latex and features a rocky surface with an orange paint finish, the interior has been further padded and material lined with a strap which would have fitted around the performers arm, to either end are press stud fastenings where the arm could be joined to the suit and hand respectively. The interior is hand inscribed in black marker 'L' for left, '#7', the suit number and 'ROB' indicated that this suit may have been used by a stunt performer as several with this name are credited.

The arm measures approximately 23" long and 9" at its widest point, it remains is superb production used condition with no degradation and only very minor paint wear, very fine.

An instantly recognisable and highly displayable artefact from this memorable superhero picture.