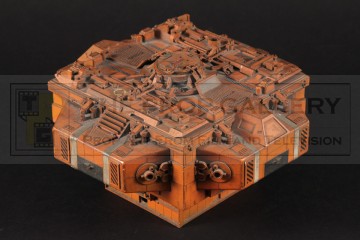 An original miniature used in the production of the long running BBC science fiction television series Doctor Who.

From the 1982 serial Earthshock starring Peter Davison as The Doctor this is the original escape pod filming miniature seen on screen as the crew evacuate the doomed freighter before Adric (Matthew Waterhouse) dies in the explosion. Expertly constructed by noted industry model maker Bill Pearson at the BBC Visual Effects Department this unique miniature is fabricated from perspex and features tubing to the interior used to pipe the Freon gas which provides the effect seen on screen as the pod departs the freighter, detailed with a variety of kit parts and a weathered paint finish. The final image presented here clearly shows the miniature on the model set and was taken by Bill Pearson during filming.

The miniature measures approximately 7.5" x 7.5" and sits 4.5" high, it remains in excellent screen used condition lacking only the most minor of detailing, very fine.

This represents an incredibly rare example of an original filming miniature from a highly regarded serial of this cult science fiction series.