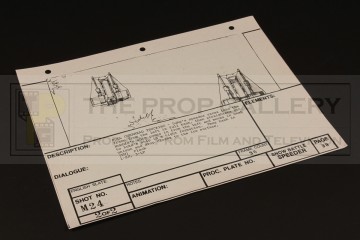 This storyboard is a production issued copy of the original rendering created by assistant visual effects art director Nilo Rodis-Jamero and depicts an overhead shot of two speeders from the now iconic battle of Hoth sequence. The storyboard was issued to Brian Johnson, part of the team which went on to win a Special Achievement Academy Award for the visual effects on this picture, and utilised at Industrial Light & Magic during the production of the visual effects sequences. The board features a detailed description of the shot underneath the illustration and was later replaced by an updated version with the omitted boards intended to be destroyed however this rare example was retained by Brian Johnson and hails from his private collection.

The storyboard measures 8.5" x 11" and remains in near perfect condition with three punch holes for binder use, very fine.