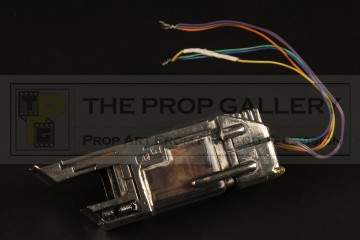 An original prop used in the production of Terminator Salvation, the 2009 science fiction action sequel directed by McG and the fourth instalment in the Terminator franchise.

Endoskeleton power packs such as this can be seen used towards the end of the picture in the Skynet factory as John Connor (Christian Bale) and his comrades plan to blow up the facility. The custom made prop is constructed from chrome plated plastic which features various detailing with an illuminating circuit board to the centre below a transparent plastic housing, this powered by wiring which protrudes from the bottom of the device and remains functional when connected to a power source.

The power pack measures approximately 4.5" long and remains in excellent production used condition exhibiting some chips and surface wear from use and handling.

A highly displayable artefact from this classic science fiction franchise.