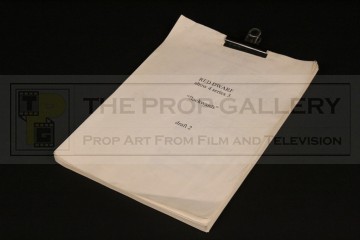 This is an early draft script for the episode Backwards, the memorable series 3 opener in which the crew find themselves on Earth where everything is happening backwards. The script consists of 65 numbered pages in addition to the front cover which states that Backwards was intended to be show four, it was ultimately broadcast as the first episode of series 3. The script does not feature the usual binding pin to the top left corner, instead it is held together with a metal bulldog clip to the top edge of the script.

The script is noted as being 'draft 2' and contains a number of significant differences to the final broadcast episode. In this script the episode begins with Lister and Rimmer having a lengthy discussion regarding various articles that Lister has retrieved from Rogerson's quarters rather than the conversation Lister and Cat have about The Flintstones which is completely absent from this draft. In addition to this the crew land on Earth together in this version resulting in various dialogue changes and the episode ends with a scene of the crew in the Starbug cockpit. This represents a rare example of a significantly different draft to the final episode and offers an interesting insight in to the production process of this memorable episode.

The script remains in generally excellent condition throughout with only light wear, notably to the front and rear pages.

A fine and rare example of an early script from this cult BBC science fiction series.