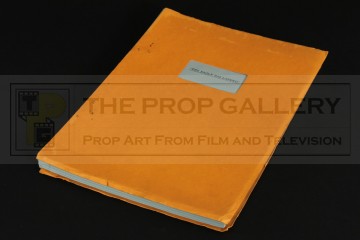 Eagle Has Landed (The)

An original script used in the production of The Eagle Has Landed, the 1976 war picture starring Michael Caine, Donald Sutherland and Robert Duvall under the direction of John Sturges.

This original production used revised final draft script is dated 23rd April, 1976 and comprises of 151 blue pages bound between front and rear covers of orange card with a window cut out to the front revealing the title of the movie to the interior cover page which is stamped with the number 156.

The script remains in excellent production used condition exhibiting only minor wear to the front and rear covers from handling, interior exceptionally fine.

A fine example of original production material from this well received war picture.