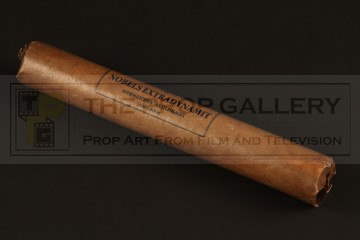 An original prop used in the production of Django Unchained, the 2012 revisionist western picture directed by Quentin Tarantino.

This prop stick of dynamite was custom made for the production and such sticks can be seen used in various scenes of the movie including the mansion explosion in the climactic sequence. The dynamite is accurately constructed from a tube covered in custom printed wax coated paper which features the brand logo 'NOBELS EXTRADYNAMIT' with various other details.

A highly displayable artefact from this well received Tarantino picture.