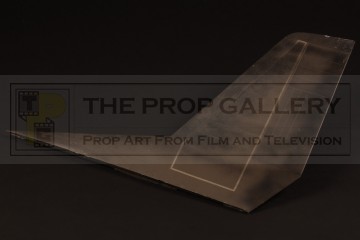 This miniature rear wing was used on one of the principal 1:12 scale Dropship filming miniatures, constructed from fibreglass resin the wing section features various panel line detail with a weathered grey paint finish and some tape detailing. the edge of the wing features two holes and the remains of filler from where it was attached to one of the filming miniatures during the production.

The wing measures approximately 22" x 16" at its widest points and remains in excellent production used condition exhibiting only minor paint wear and some small chips to the leading edges, overall very fine.