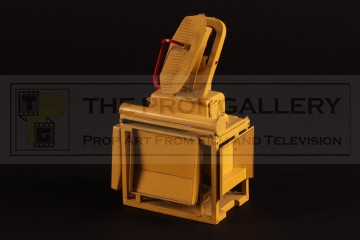 This miniature radar device formed part of the Sulaco Dropship bay miniature set which was constructed at 1:12 scale of the full size Pinewood Studios set. The miniature is constructed largely from plastic and features a dish to the top of metal gauze which can be rotated slightly, this dressed with some model kit parts with a weathered yellow paint finish.

The miniature stands approximately 4.5" high and is 3" wide, it remains in excellent production used condition possibly lacking one minor kit part, some minor paint wear is present but generally fine.

A highly displayable miniature artefact from this science fiction classic which was awarded the 1986 Academy Award for Best Visual Effects.