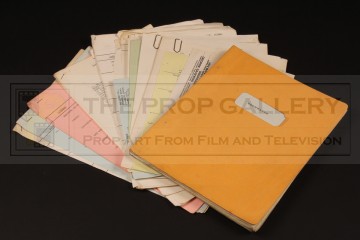 An original script used in the production of Doomwatch, the 1972 science fiction picture based on the BBC television series of the same name created by Kit Pedler and Gerry Davis.

This original production used script comprises of 88 pages bound between front and rear covers of orange card with the front featuring a window cut out revealing the title of the movie to the interior cover page which is hand inscribed with the name of assistant director Derek Whitehurst who used this script during the production. The script features extensive annotations throughout which are inscribed in Whitehurst's hand and numerous coloured amendment pages. The script is accompanied by a wealth of production paperwork to include approximately 30 artist contracts for the various cast members, shooting schedule, costume breakdown, character list, unit list, various script pages and more, some of this again annotated in Whitehurst's hand.

The script remains in excellent production used condition with some light wear from use and handling with the accompanying paperwork in varying conditions, generally good to excellent with minor creasing and tearing to some pages.

An exceptionally rare and concise collection of original production material from this cult science fiction picture.