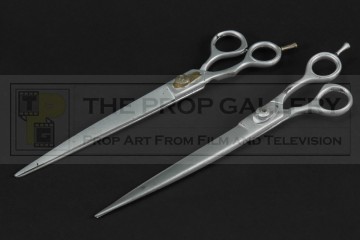 These stunt scissors were custom made by the production and used by Emily Booth as The Snipper for shots where the use of hero metal scissors was unsuitable for safety reasons. The scissors are moulded from the hero metal prop in a partially flexible plastic material and finished in silver paint.