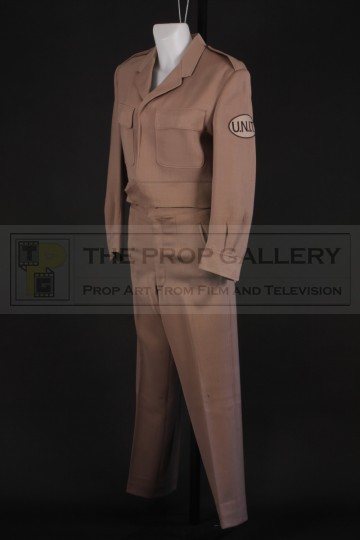 Military dress of this style is first seen worn by UNIT personnel in the 1968 serial The Invasion starring Patrick Troughton as The Doctor and later in the Jon Pertwee serials Spearhead From Space and The Silurians, following this only the Brigadier himself retains it for The Ambassadors of Death and Inferno after which differing dress is seen used by all.

Bespoke made by the BBC Costume Department for The Invasion the costume was based on standard No4 dress is expertly constructed from beige twill with gold satin lining to the interior and features both zip and press stud fastenings to the front and chest pockets. The UNIT patch seen to the left arm is a replacement which was custom fabricated by an professional industry costumier as any original patches were removed following Doctor Who for use in subsequent unknown productions, before this was applied the outline of the original patch was clearly visible. The trousers feature two labels one printed 'BBC, 34/28/28' which are the approximate chest, waist and leg sizes and another which is hand inscribed '1960s 2PC' with some other markings.