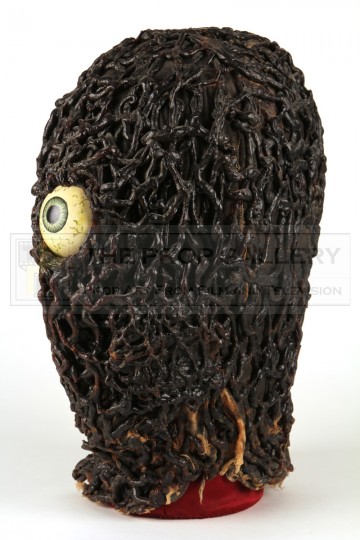 An original creature mask used in the production of the long running BBC television series Doctor Who.

From the 1979 serial City of Death starring Tom Baker as The Doctor is this original screen used mask for Scaroth, last of the Jagaroth. This mask is one of two created for the production under the supervision of make-up designer Jean Steward and was specifically used for the reveal shots as we see the Count (Julian Glover) remove his mask in the cliffhanger at the end of the first episode and later as he reveals his true self to the Countess (Catherine Schell) before killing her, this achieved as an insert shot where we see a prosthetic of Glover removed from this mask.

The Scaroth mask is constructed from piped latex over a base of muslin material and features a large hand painted eyeball to the centre, this mounted on a head form to retain the masks shape and enable it to be displayed. Both the unique construction of the mask and the hand painted eyeball can be conclusively screen matched to the reveal sequence although the eyeball has been mounted the opposite way from is use on screen.

The mask stands approximately 14" high remains in very good vintage condition with the latex having hardened but remaining in overall stable condition, lacking some small pieces most notably the tentacles from above the eye.

This represents an instantly recognisable and exceptionally memorable creature artefact from a classic serial of this cult science fiction series.