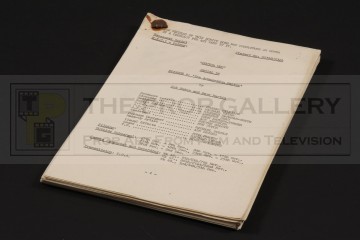 From the 1979 Key to Time serial The Armageddon Factor starring Tom Baker as The Doctor this is an original production used rehearsal script for episode four. The script comprises of 87 pages in addition to a page featuring details of the sets and cast and a further cover page bound by a pin to the top left corner. The cover page features the name of the serial, a list of the various production staff involved with the episode and the dates on which rehearsals and filming were to take place throughout November 1978.

A fine example of original production material from a memorable serial of this long running science fiction series.