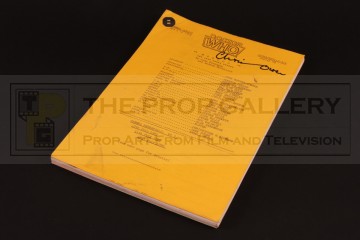 From the 1980 serial Meglos starring Tom Baker as The Doctor this is an original camera script for the three day studio recording which took place at BBC Television Centre on 10th, 11th & 12th July, 1980. The script comprises of approximately 90 pages of various colours including white, blue, green and pink in addition to a plot outline featuring the the working title 'THE LAST ZOLFA-THURAN', cast list and a detailed 12 page running order. The cover page features the series logo with the title 'MEGLOS' below and details of the various production staff, it has been hand signed by Christopher Evans who portrayed the Earthling in black marker pen.