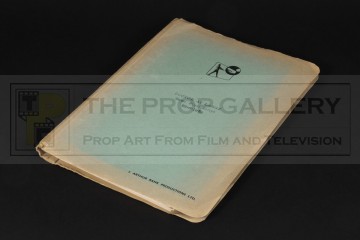 An original script used in the production of Doctor at Large, the 1957 British comedy picture starring Dirk Bogarde under the direction of Ralph Thomas.

This original production used script comprises of 102 pages bound within front and rear covers of green card with the front featuring the logo of The Rank Organisation and being type written 'DOCTOR AT LARGE' with the date 28-6-1956, unmarked throughout. The script measures approximately 14" x 10" and remains in very good vintage condition with the covers exhibiting some significant age related toning with moderate edgewear, extremely fine to the interior.

A incredibly rare artefact from this classic British film series.