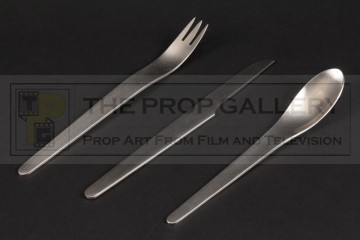 An original set of cutlery used in the production of 2001: A Space Odyssey, the 1968 epic science fiction masterpiece directed by Stanley Kubrick.

This is an original set of cutlery selected by director Stanley Kubrick for its futuristic look and seen used by Keir Dullea as Dr. Dave Bowman and Gary Lockwood as Dr. Frank Poole aboard Discovery One.  Designed by Danish modernist Arne Jacobson for leading jeweller A. Michelsen of Copenhagen the flatware set consists of a knife, fork and spoon of stainless steel with each piece stamped 'A. MICHELSEN, DENMARK'. Following the production Stanley Kubrick retained this cutlery and later gifted it to a Hollywood agent who was dining at his house.

Each piece measures between 7" and 8" long and remains in excellent vintage condition exhibiting surface wear as you would expect, overall fine.

A rare collection with fantastic provenance from this Academy Award winning science fiction classic which remains one of the most influential pictures in the history of cinema.