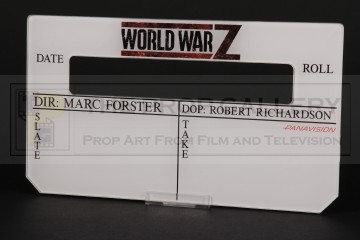 An original clapperboard used in the production of World War Z, the 2013 action picture starring Brad Pitt under the direction of Marc Forster.

This is an original face used on one of the modern style digital clapperboards during the production, these are made to be removable allowing the more expensive digital boards to be utilised on several productions rather than just one as was common with the more traditional sign written slates. Constructed from white acrylic the Panavision branded camera board features the movie logo to the top in addition to the names of director Marc Forster and Academy Award winning cinematographer Robert Richardson, the slate features spaces to record the slate, take and roll numbers and remains in near perfect unused condition measuring approximately 11" x 6".

A fine example of original production material from this popular action romp.