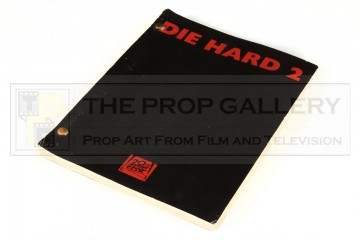 This original production used script comprises of 115 pages bound between front and rear covers of glossy black card with the front featuring the movie logo to the top and that of Twentieth Century Fox to the bottom. The interior cover page is dated November 16, 1989 and features the hand inscribed name/signature of special effects artist Paul Stewart who utilised this script during the production. Large sections of the script relating to the special effects requirements have been highlighted in yellow, many of these parts hand inscribed 'GOT' as the shots were achieved and the page corners folded over to indicate completion.

The script remains in excellent production used condition exhibiting some edge and cover wear due to production use and age, overall fine.

An exceptional example of original production material which clearly saw extensive use during the making of this classic action sequel.