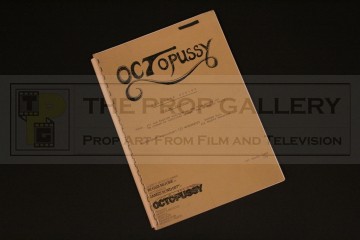 An original dialogue script used in the production of the 1983 James Bond adventure Octopussy starring Roger Moore as the suave spy.

This dialogue script was used in post production when the film was dubbed and subtitled. The 43 page script is spiral bound with fawn coloured front and back textured card covers, the cover features a printed Octopussy 007 logo with production details to the bottom left and is dated 1st March 1983. The cover is inscribed to supervising editor John Grover in the top right corner in pen which has subsequently been crossed in black marker. The script features reel number information and a number of hand annotations throughout where parts of the dialogue have been hand written in pencil to correct inconsistencies in the printed script.

An interesting artefact and a great insight in to the production process of this memorable Bond outing.