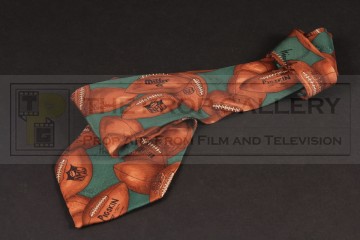 An original tie used in the production of Seven, the 1995 crime thriller starring Brad Pitt and Morgan Freeman under the direction of David Fincher.

This is an original tie as worn by Brad Pitt as Detective David Mills. One of several designs worn by Pitt throughout the movie created by noted fashion designer Nicole Miller this tie features an American Football inspired design and retains its original label which doubles as the keeper loop, this is printed with the name of the designer and dated 1994.

A rare and displayable artefact from this highly regarded picture.