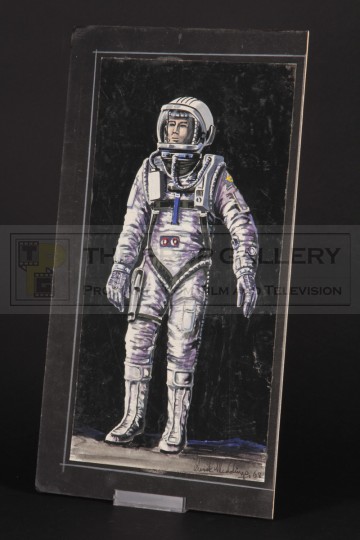 An original concept artwork used in the production of the 1969 science fiction picture Doppelganger, also known as Journey to the Far Side of the Sun.

Doppelganger was the first live action film of television producers Gerry and Sylvia Anderson who had previously created the highly regarded Supermarionation series Thunderbirds and Captain Scarlet and the Mysterons with Century 21 Productions.This concept artwork was designed by legendary visual effects director Derek Meddings, a prolific designer of Anderson productions who would later become an Academy Award winner and one of the most highly respected and influential effects artists of his generation. Accomplished in paints on paper the design is a concept for the EUROSEC spacesuits which would later be reused, along with various other props, in Anderson's subsequent television series UFO. The piece is signed and dated to the bottom right corner 'DEREK MEDDINGS 68'.

The artwork measures 11" x 6" and has been mounted on artists board, it remains in excellent condition, very fine.

A vibrant and displayable example of original artwork from this cult science fiction production which has come to be regarded as one of Meddings' finest works.