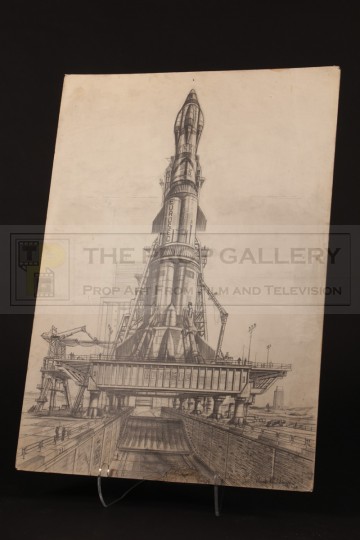 This is the original hand drawn concept artwork for the EUROSEC launch rocket which features prominently in the movie. Designed by legendary special effects director Derek Meddings, a prolific contributor to Anderson productions who would later become an Academy Award winner and one of the most highly respected and influential effects talents of his generation.

The artwork is accomplished in pencil on artists board and epitomises Meddings' trademark futuristic style, the piece is extraordinarily detailed and shows the rocket on its launch pad. The artwork measures an impressive 30" x 21" and remains in excellent vintage condition with some minor touch ups to the bottom and a single pin hole to the top.

The miniature effects of this production, and particularly those of the launch, rank amongst Meddings' most celebrated and this represents a magnificent example of concept artwork for a significant craft in the hand of this highly regarded miniature effects artist.