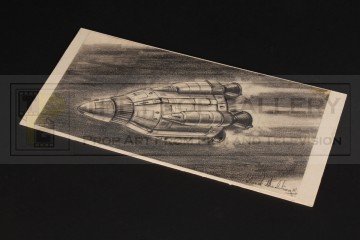 This is an original hand drawn concept artwork for the Phoenix command module featured in the movie. Designed by legendary special effects director Derek Meddings, a prolific contributor to Anderson productions who would later become an Academy Award winner and one of the most highly respected and influential effects talents of his generation, the artwork is accomplished in pencil on white paper the concept artwork is highly detailed and epitomises Meddings' trademark futuristic style, signed by Meddings to the bottom right corner.

The artwork has been backed on to thick card stock and measures approximately 10" x 5", it remains in excellent condition having been retained by Derek Meddings for many years after the production, overall very fine. The miniature effects of this production rank amongst Meddings' most celebrated and this represents an excellent example of concept artwork for a significant craft in the hand of this highly regarded miniature effects artist.