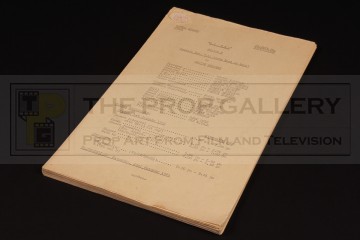 From the 1965 serial The Romans this is an original camera script for episode two entitled All Roads Lead to Rome. The script comprises of 50 pages printed on cream coloured paper in addition to a three page running order, a further page detailing the cast, extras and technical requirements plus a front cover which lists the production staff and various other details. This was the personal script of noted series writer Dennis Spooner and originated from his personal collection before his death in 1986.

The script is printed on foolscap sized paper measuring approximately 13" x 8", this was the standard imperial paper size before A4 as we know it today. The script remains in excellent condition with only minor edge wear and toning having been carefully stored for over 50 years but does lack the metal binding pin once present to the top right corner.

The rarity of original production material from the William Hartnell era cannot be overstated and this represents a desirable artefact from the birth of this classic science fiction series.