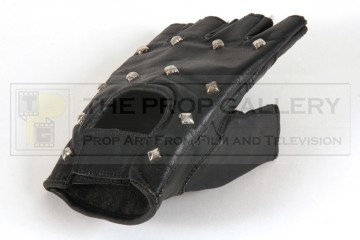 An original glove from the production of the BBC science fiction comedy series Red Dwarf.

This studded left handed biker style glove was obtained by the BBC Wardrobe Department for use by Craig Charles as Dave Lister. Gloves of this style this were worn by Lister from Series V onwards, when they became part of his signature costume. Constructed from leather with applied studs and velcro fastening the glove is very similar to those worn by Charles on screen. However, despite lineage from Grant Naylor Productions where this was obtained with other original items we have been unable to determine on screen use and so this is offered here as a production artefact that was ultimately unused.

The glove remains in good condition throughout.