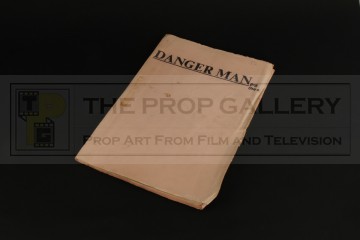 Jeremy Summers personal script - The Man With the Foot

From the Series Three episode The Man With the Foot broadcast in March 1966 this is the original script utilised during the production by director Jeremy Summers. The script comprises of 70 pages bound between front and rear covers of pink card with the front bearing the name of the series 'DANGER MAN' with Summers' initials 'J.S' hand inscribed to the top corner in pencil, the interior cover page features the name of the episode  with writing credit to Raymond Bowers and is noted as 'SERIES II, 43', this referring to the fact this is the 43rd episode of the second series of the new longer format. The script features extensive hand inscribed annotations throughout by director Jeremy Summers and to the interior rear cover, so extensive in fact that every single page features annotations of some kind, without exception. Furthermore taped to the interior cover page are three hand drawn scale maps to include Drake's hotel, interior casino and Spanish bar, these accomplished in black pen on tracing paper.

The script measures approximately 13" x 9" and remains in good vintage condition with some rusting to the binding pins, edge wear and toning, most notably to the front and rear covers which also appear slightly faded, otherwise a fine example of an original directors script which clearly saw heavy use during the production.

An exceptional example of original production material from this classic British series.