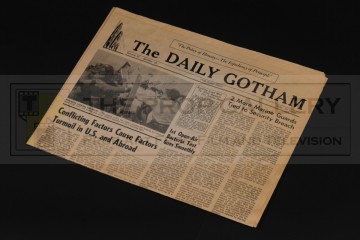 An original prop from the production of Batman Returns, the 1992 superhero sequel starring Michael Keaton as the caped crusader under the direction of Tim Burton.

This prop Daily Gotham newspaper is one of a number custom made for the production, printed on the traditional stock it features various news unrelated to the movie. Interestingly the interior features the same stock news items used on numerous examples created by The Earl Hays Press of California who have been producing such prop newspapers for use in film and television productions for decades, this interior spread can be seen used in many productions, notably Back to the Future Part II (1989).

An affordable artefact from this classic of the superhero genre.