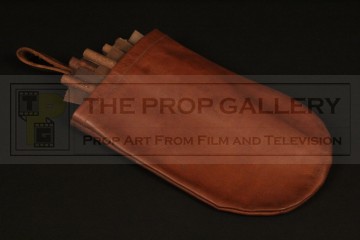 This is one of a number of quivers containing crossbow bolts used by the Sheriff of Nottingham's  (Alan Rickman) guards. The quiver is constructed from leather with a belt loop and contains six bolts which are hand made from wood. The quiver measures approximately 11" x 7" with the bolts measuring 11.5", it remains in excellent production used condition.