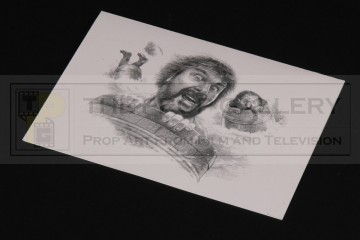 Hobbit (The): An Unexpected Journey

An original crew card from the production of The Hobbit directed by Peter Jackson.

These cards were given out to cast and crew members after principal photography wrapped as a thank you. The card features an illustration of director Peter Jackson which was drawn by conceptual designer John Howe. Inside the card contains a Gandalf quote from An Unexpected Journey and further reads....

'We finally got there...and back again. It has been quite a journey!'

'We could not have done it without you - a huge and heartfelt thank you!'

'With all our love and appreciation'