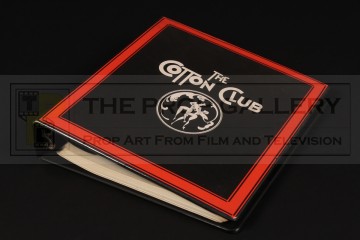 An original script used in the production of The Cotton Club, the 1984 drama starring Richard Gere under the direction of Francis Ford Coppola.

This original production used final draft script dated December 8th 1983 comprises of 110 pages in addition to lists of characters and musical numbers located at the front, to the rear are a further 8 pages which acts as an index containing the scene numbers and descriptions and the pages of the script on which they are located. The script is housed in a period black ring binder with a plastic cover which houses a custom printed cover sheet featuring the Cotton Club logo, this has been backed with a hand made border of self adhesive card stock to create the cover.

The binder measures approximately 11.5" x 10.5" and remains in excellent production used condition as does the script contained within, this exhibits only minor edge wear having been well protected by the binder, overall very fine.

A rare example of original production material from this Academy Award nominated picture.