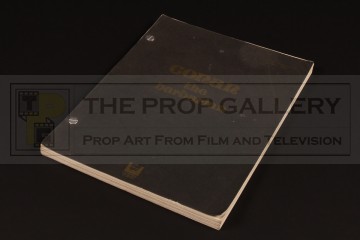 An original script used in the production of Conan the Barbarian, the 1982 fantasy picture starring Arnold Schwarzenegger under the direction of John Milius.

This is an original production used second draft script written by John Milius and comprises of 119 pages in addition to a title page bound between front and rear covers of black card. The front cover of the script features the name of the movie in embossed gold lettering with a Dino De Laurentiis production credit to the top right corner and the Universal Studios logo as a footer, the interior title page is stamped 'FILED' in red ink with the date 'JUN 1980'. This second draft would later be superseded by further drafts and does contain some differences to the finished picture.