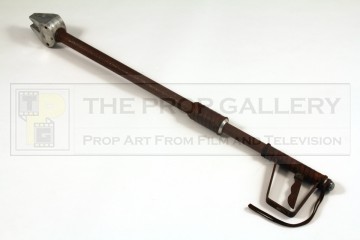 An original prop used in the production of Con Air, the 1997 action picture starring Nicolas Cage.

This restraint can be seen used on screen for the scenes were mass murderer Garland Green (Steve Buscemi) is introduced. Constructed from solid metal the extremely heavyweight restraint features a leather gripped handle with trigger action designed to control the locking jaws seen in close up in the movie, this operation no longer functional due to a snapped cable.

The restraint measures approximately 45" in length and remains in good production used condition with some surface rusting.

A fine artefact from a memorable scene of this well received action picture.