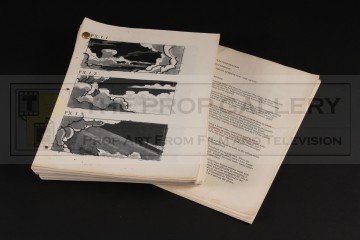 An original storyboard sequence used in the production of The Abyss, the 1989 science fiction adventure picture directed by James Cameron.

This set of storyboards covers the entire movie and was sent by James Cameron to effects house Boss Films owned by Academy Award winner Richard Edlund to quote for the movies complex visual effects sequences. The storyboard set is largely dated March 1988 and comprises of over 360 printed pages which include a large number of illustrations and notes detailing the action taking place and how each shot was to be achieved through the use of miniatures and other special effects techniques, numerous pages featuring hand inscribed annotations and highlighter pen. This set includes the original storyboards for all scenes which were later omitted, either in their entirety or replaced with live action, in subsequent storyboard sequences issued later these storyboards were replaced by blank pages.

This is accompanied by a 5 page memo from director James Cameron to Boss Films with the subject 'SPECIAL VISUAL EFFECTS FOR "THE ABYSS"' addressing the various requirements and techniques to be used in great detail, Cameron talks candidly about his ideas and stipulations admitting he has no idea how the Pseudopod sequence is to be achieved and requests that it be quoted for separately, annotations to final page are present, these made at Boss Films. Also accompanying the storyboards is a 27 page breakdown of each individual shot broken down by the visual effects technique by which they were to be achieved, this amusingly titled by the production "The How and Why Wonder Book of Abyss Effects Shots and Their Numbers".

The storyboard set measures approximately 11" x 8.5" and is around 2" thick, it remains in very good condition exhibiting minor wear from use and handling, memo similar with more notable wear and tearing to front, otherwise good.

An exceptional archive of original production material from this Academy Award winning picture which remains highly regarded for its groundbreaking visual effects.