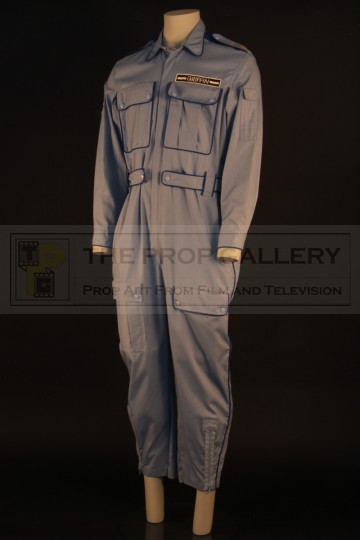 This flight suit was custom made for the production and worn on screen by Daniel Benzali as Commander Griffin in the episode Trivial Games and Paranoid Pursuits. The full length one piece suit zips from crotch to neck and features various pockets to the chest, knees and left arm with an integral adjustable belt to the waist.. The suit also features a 'GRIFFIN' name patch to the left chest in addition to a circular 'RONALD REAGAN SPACE STATION' patch and further 'STATION COMMANDER' patch to the right arm with a rank insignia below and further stars denoting the rank of commander to the shoulder epaulettes. The costume bears a label to the interior collar which is hand inscribed 'STATION COMMANDER' with an additional cardboard tag also present, the United States patch once present on the top of the left arm has long since been removed which is common on Star Cops costumes, it remains in excellent screen used condition throughout

A fine example of original wardrobe from this cult science fiction series.