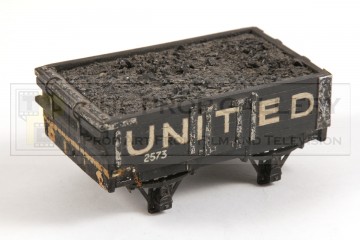 Trucks similar to this can be seen used throughout the series to transport various materials. This truck is hand made from wood and features a coal load to the interior, painted with 'UNITED' livery and lacking its wheels and bumpers which were likely cannibalised by the production for use on other models. Although we have been unable to locate this exact style of truck or livery in the series its provenance is impeccable.

An affordable and displayable artefact from the production of this popular children's television series.