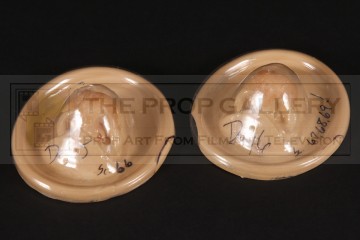 Original appliances used in the production of Cinderella Man, the 2005 drama starring Russell Crowe and Renne Zellweger under the direction of Ron Howard.

These nose appliances were worn by Russell Crowe as boxer James J. Braddock, this lot consists of two appliances which are constructed from latex with a skin tone paint finish. The appliances are presented on two part vacuum formed casts of Crowe's nose, one half of which acts as a cover to encapsulate the piece, each is hand inscribed with the day of the shoot and the scene numbers in which these appliances were used. Each of the nose holders measures approximately 4.5" x 4" with the appliances remaining in excellent used condition.