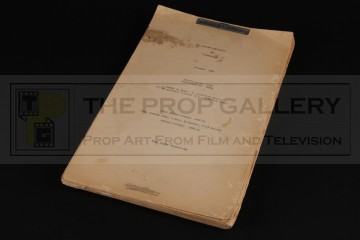 An original continuity script from the production of Cinderella, the 1950 animated musical fantasy classic produced by Walt Disney.

This original cutting continuity script is dated December 1949 and comprises of 139 pages split between eight reels. The front cover features various production and technical details with the interior featuring numerous hand inscribed annotations throughout in both pen and pencil.

The script measures approximately 14" x 8.5" and remains in very good vintage condition exhibiting quite significant toning with some wear and staining to the front cover but generally fine considering is age of over seven decades.

This represents an incredibly rare example of original material from the production of this Walt Disney classic which was responsible for reversing the fortunes of the studio thanks to its commercial and critical success.