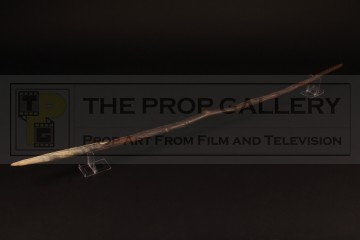 An original prop from the production of Cast Away, the 2000 adventure picture starring Tom Hanks under the direction of Robert Zemeckis.

This spear was custom made by the production for use by Tom Hanks as Chuck Noland as he attempts to survive on his island. The large spear is constructed from rubber with a steel core to imitate a tree branch and features various decorative carvings including a number of fish with a hand painted brown finish and yellow highlights to the tip to simulate use during Chuck's stay on the island.

The prop spear measures an impressive 56" in length and remains in excellent production made condition with light paint wear and some rubber missing to one end exposing the metal core. Despite showing signs of wear consistent with production use we have been unable to locate this specific prop in the final cut of the movie.