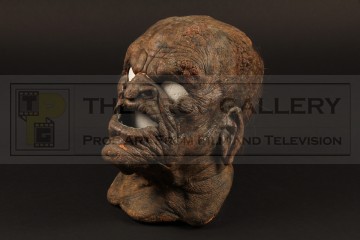 Chronicles of Narnia: The Lion, The Witch and the Wardrobe

An original mask used in the production of The Chronicles of Narnia: The Lion, the Witch and the Wardrobe, the 2005 fantasy adventure picture based on the C. S. Lewis novel of the same name.

A goblin mask identical to this can clearly be seen on screen in the scenes where Aslan the great lion is sacrificed by the White Witch (Tilda Swinton). The mask is constructed from foam latex and features a detailed paint finish with hand punched hair, it remains in generally good production used condition and is supple to the touch with some minor damage to the extremities, most notably around the eyes, otherwise fine.

A displayable artefact from this box office smash which won the Academy Award for Best Makeup.