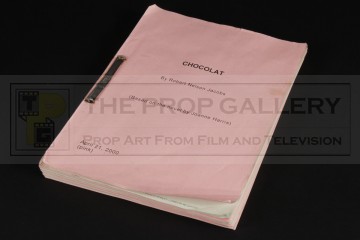 An original script used in the production of Chocolat, the 2000 romantic drama picture directed by Lasse Hallström.

This original production used script comprises of 121 pages in addition to a front cover bearing the title of the movie with writing credits and dated April 21, 2000, these pages being pink with over half of the script made up of revised green pages dated May 6, 2000 with a crew memo regarding these changes present to the front of the script.

The script remains in very good production used condition with some edge wear present from use and handling.