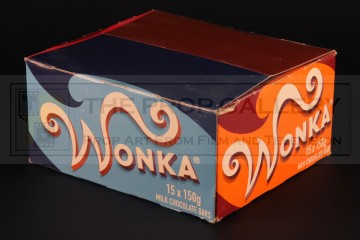 Wonka boxes such as this can be see as the workers of the Salt's Nuts factory open thousands of Wonka bars in search of the Golden Ticket. Custom printed by the production the multicoloured box features each of the four flavours of Wonka bar to the sides with writing stating that the carton contains 15 bars, it is empty and blank to the interior.

An instantly recognisable and displayable artefact from this well received adaptation.