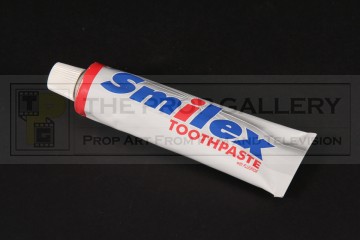 Toothpaste tubes such as this can be seen on screen at the beginning of the film as we see Mr Bucket (Noah Taylor) working in the factory. Branded Smilex in an obvious nod to the 1989 Warner produced and Tim Burton directed picture Batman this toothpaste tube was custom made for production and is filled with unknown contents. The tube features the Smilex brand logo with product details and is marked in the small print as being copyright Warner Bros.

A fine displayable artefact from this well received adaptation.